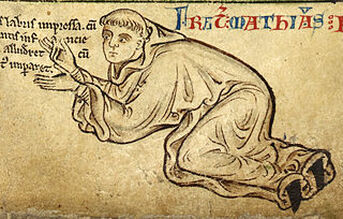 Categories (list of works cited – preliminary) [BKG Note: One Westmonasteriensis cite in 1755 Dict. vol. 2.  Two parallel Flores Historiarum manuscript texts are now known. One attributed to Roger of Wendover and the second thought to be perhaps based on Roger of Wendover, but edited and added to by Matthew Paris.  Both had later augmentations.  As far as I can determine, the only early (before the Dictionary) printed version was the title below, with which Matthew Paris is associated.] [BKG Note: SJ quotes Latin text on Lady Godiva's hair, apparently from memory, as he reverses tricas (knots/braids/tangles) and crines (hair).

Barry Baldwin has kindly provided the following:
"tricas = tangles
capitis = of or on the head
crines = hairs
dissolvens = loosening

Tricas should logically come first, since Lady G would need to disentangle before shaking her tresses loose enough to conceal her nudity…"