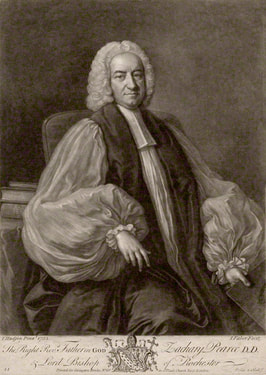 Categories (list of works cited – preliminary) [BKG Note: one Pearce citation in 1755 Dict. ; no additional Pearce citations identified in 1773 Dict.  Pearce is also possibly the Unknown Correspondent (a) and/or the Unknown Correspondent (b).  Yale vol. 18, p.111, n.1 quotes Boswell: "... the only aid which he [Johnson] received was a paper containing twenty etymologies, sent to him by a person then unknown, who he was later informed was Dr. Pearce, Bishop of Rochester."  Item #431 in the Sale Catalogue of Samuel Johnson's Library is Derby's Commentary on the evangelists, 2v. 1777 ....  Donald Greene, in Samuel Johnson's Library, an Annotated Guide, says: "A Commentary, with notes, on the Four Evangelists and the Acts of the Apostles [by Pearce, posthumous] was edited by the bishop's chaplain, John Derby, and includes a life of Pearce, said to be "written by himself," but largely by Johnson who also contributed a fine dedication to King George III."  Per R. DeMaria, this Dedication appears in the recently issued Yale vol. 20.]