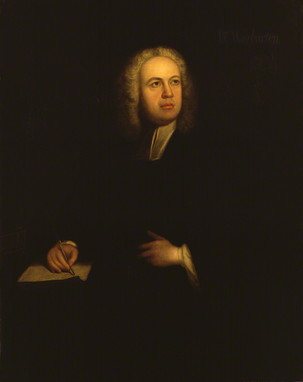 Categories (list of works cited – preliminary) [BKG Note: five Warburton cites identified in 1755 Dict. vol. 1, four cites in 1755 Dict. vol. 2.  No additional cites were identified in the 1773 Dict.  The Sale Catalogue of Samuel Johnson's Library, Fleeman ed., lists the following items by Warburton: #21 Warburton's Divine Legation, 4v.---Julian; #131 Warburton's Shakespeare 8v.; #377 5. Warburton's sermons, 2v. &c.]
​ Ver. 219. And goad the prelate slumbering in his stall.] The good Eusebius, in his Evangelical Preparation, draws a long parallel between the ox and the Christian priesthood. Hence the dignified clergy, out of mere humility, have ever since called their thrones by the name of stalls. [BKG emphasis] To which a great prelate of Winchester, one W. Edinton, modestly alluding, has rendered his name immortal by this ecclesiastical aphorism, who would otherwise have been forgotten; Canterbury is the higher rack, but Winchester is the better manger. By which, however, it appears that he was not one of those here condemned, who slumber in their stalls.— Scribler. [BKG Note: too clever by half, I think, to be by Warburton.]