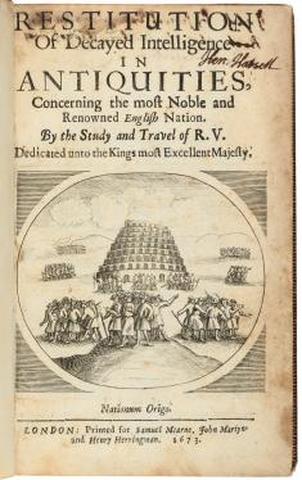 BKG Bio-tweet: b. Verstegan (Dutch); Saxon studies; became catholic, left Oxford, England; wrote, pub. in Antwerp; SJ cites V. in etym.
Categories (list of works cited – preliminary) [BKG Note: Three Verstegan cites were identified in 1755 Dict. vol. 1, two cites in Dict. vol. 2.  No additional Verstegan cites were identified in the 1773 Dict.  The edition of the title below used by SJ is unknown.  The 1st edition of the title was 1605. In Johnson the Philologist, 1988, Diasuke Nagashima suggests (pp.166-169) that the views of Minsheu, Casaubon, Somner, and Verstegan for some headwords were adduced and discussed via their entries in Skinner rather than in source volumes.]