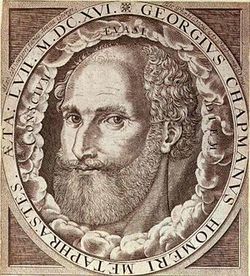 Categories (list of works cited – preliminary) [BKG Note: about 68 Chapman cites in 1755 Dict. vol. 1, about 80 Chapman cites in Dict. vol. 2.  Reddick, in The Making of  Johnson's Dictionary, indicates that 177 Chapman cites were added in vol. 2 of the 1773 Dict. (p.121) and 18 added under the letter "G" (p.115).  My examination of the first volume of the 1773 Dict. found a total of 21 added Chapman cites in Dict. vol.1 with 17 of these occurring under the letter "G."  A sample of the 1755 Dict. Chapman cites are provided below.  A sample of about 50 of those added in the 1773 Dict. are indicated below in bold italic.  Brackets are added when the work was not cited, but was identified.  Reddick, p.130, indicates that the Chapman 1773 additions are from his translation of the Iliads, however my sample of the 1773 Dict. Chapman added cites indicates that both Iliad and Odysses texts were used by SJ.  I conclude that the 1773 Dict. additions are likely from a different copy of the Works than used in 1755 (either 1616 or 1634).  The 1755 Dict. Odyssey quotations appear to have come from the title below.  Assuming the sale description is accurate, the Odysses is likely from the 1634(?) edition of the Whole Works, as the title of the earlier separate Odysses reads "ye Greeke" rather than "the Greeke," and no separate title page for the Odysses was found in the earlier Works publication.  The printer of the Odysses is also consistent with the 1634(?) edition.  The type appears not to have been reset for any of the early Odysses editions, or between the 1611 and 1634 Iliads editions.  I think it reasonable to conclude that SJ used the 1634 Works for both the Iliads and Odysses quotations for the 1755 Dict. and that the parts were separated.]

The Iliads of Homer Prince of Poets. Never before in any languag truely translated. With a Comment uppon some of his chiefe places; Donne according to the Greeke; [with] Homers Odysses. Translated according to the Greeke. London: printed for Nathaniel Butter, [both undated: 1611? & 1634?].  [BKG Note: This title was cited in a sale description as "...the Odyssey extensively annotated by Samuel Johnson in preparation for the first edition of his dictionary."  (Not in Reddick, in Fleeman's A Preliminary Handlist of Copies of Books Associated with Samuel Johnson, or in the Sale Catalogue of Samuel Johnson's Library, a Facsimile Edition, Fleeman, ed.)  Sold by Peter Harrington, now unlocated.  Thanks to R. DeMaria, Jr. for pointing out the sale description.] ​ [BKG Note: A likely source of Chapman cites for both the 1755 and 1773 Dict. is the Whole Works title below.  The Odysses separate title page is as above.]
The whole works of Homer; prince of poetts· In his Iliads, and Odysses. Translated according to the Greeke, by Geo: Chapman, undated (1634?), London: printed for Nathaniel Butter.