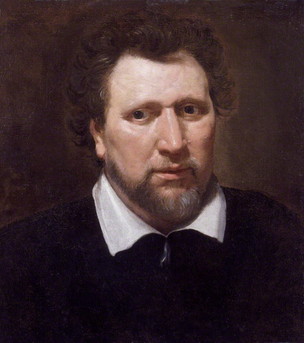 BKG Bio-tweet: Well educated; apprentice mason; author of celebrated plays, masques, still-read poems; “h” in 1640 Grammar, Abbey inscrip.
​
Categories (list of works cited – preliminary) One volume of Ben. Jonson's works was issued in 1616, and a second, posthumous volume, The vvorkes of Beniamin Ionson. was issued in 1640, London : Printed by John Beale, James Dawson, Bernard Alsop and Thomas Fawcet for Richard Meighen and Thomas Walkley). A one volume 1692 edition of the Works was issued.  (The works of Ben Jonson, which were formerly printed in two volumes, are now reprinted in one. To which is added a comedy, called The nevv inn· With additions never before published, London, 1692, Printed by Thomas Hodgkin, for H. Herringman, E. Brewster, et al.)  Because SJ quotes from "Ben. Johnson's New-Inn," his use of the one volume 1692 edition or the edition issued in 1716, London, Printed for J. Walthoe, M. Wotton. . . J. Tonson, and W. Innys, 1716. 6 volumes, is more likely (see New Inn and Tavern Academy below).  [BKG Note: Greene in Samuel Johnson's Library, an Annotated Guide, opines that the five Johnson volumes of lot 123 of the SJ Library Sale catalogue are from the seven volume 1756 Whalley edition, but these could as well be from the six volume 1716 edition.  There are about 240 B. Johnson [Jonson] cites in 1755 Dict. vol. 1 and about 300 cites in Dict. vol. 2]