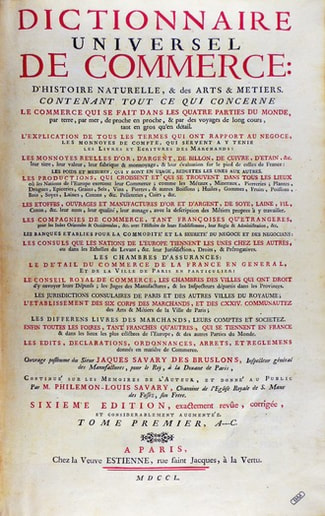 Categories (list of works cited – preliminary) [BKG Note: 9 Savarycites in 1755 Dict. vol. 1, none in Dict. vol. 2.  No additions of Savary cites were identified in the 1773 Dict.  All Savary quotations are used as a definition (sense) of the headword.  All Savary cites are for headwords under A or B and several also list Trevoux or Chambers as an additional source.  Citations of Trevous and of Chambers continue through both Dict. volumes.  The entry for acacia specifies the French text below as the Savary source.  The English translation of Savary by Postlethwayt, also listed below, is a possible source, but the entries are verbose, and it would have been as easy for SJ to extract from the French.  The Sale Catalogue of Samuel Johnson's Library, A Facsimile Edition, 1975, Fleeman, lists item 354 Postlethwayt's dictionary, 2v. 1751, and item 645 . . . some numbers of Postlethwayt's dictionary, &c.]