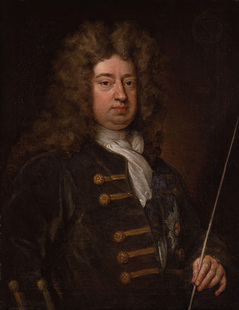 BKG Bio-tweet: Significant offices to succession of Kings; rake; patron to poets; small but pleasing poetic output (SJ in “Life”)
Categories (list of works cited – preliminary) [BKG Note: about 11 total cites in vol. 1 of the 1755 Dict., about 9 total cites in vol. 2; one additional citation in the 1773 Dict.; two brief Dorset poems appear in A new miscellany of original poems, on several occasions. Written by the E. of D. Sir Charles Sidley, Sir Fleetw. Shepheard, Mr. Wolesly, Mr. Granvill, Mr. Dryden, Mr. Stepney, Mr. Rowe. And several other Eminent Hands. Never before Printed. 1701, neither of which is quoted in the Dict.; most knowledge of Dorset's poems during his lifetime was from circulated manuscripts.]
The works of the most celebrated minor poets. Namely, Wentworth, Earl of Roscommon; Charles, Earl of Dorset; Charles, Earl of Halifax; Sir Samuel Garth; George Stepney, Esq; William Walsh, Esq; Thomas Tickell, Esq. Never before collected and publish'd together. In two volumes. 1749, London: Printed for F. Cogan....; [BKG Note: all of the Dorset poems below are in this title.  Per Reddick, in The making of Johnson's Dictionary (204), a copy of this title marked by SJ was in the Hyde Collection, presumably now at Harvard.   J.D. Fleeman, in The Sale Catalogue of Samuel Johnson's Library, A Facsimile Edition, 1975, U. of Victoria, indicates that this copy may be only V.1, and only annotated by SJ for Garth, and not the other poets. The 1959 Pierpont Morgan Library Samuel Johnson exhibition, item 113, also says this is only Vol. 1, but says Dorset and Halifax were also annotated in this volume.  Volume 1 of this title contains only Roscommon, Dorset, Halifax, and Garth.]