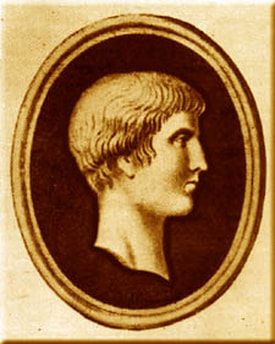 Categories (list of works cited – preliminary) [BKG Note: two Martial cites were identified in 1775 Dict. Vol. 1, one Martial cite in 1755 Dict. Vol.2.  The SJ source for the Martial epigram quotes is unknown.  Martial is also cited in quotes of other authors such as B. Jonson, Dryden, and Addison.]

The English translation from Loeb is:
99. Basket
​I have come, a barbarian basket, from the painted Britons,
​but Rome now prefers to call me hers.

Martial Epigrams 100, Book 1, LCL 94, pp. 112-113, Loeb Classical Library, edited and translated by D.R. Shackleton Bailey; dad/daddy
In the etymology and definition for DAD/ DADDY SJ writes "The child's way of expressing father. It is remarkable, that, in all parts of the world, the word for father, as first taught to children, is compounded of a and t, or the kindred letter d differently placed; as tad, Welsh; Greekassa, Greek; atta, Gothick; tata, Latin. Mammas atque tatas habet Afra, Mart.] Father." [BKG Note: the Martial cite is not in the 1773 Dict.]

The English translation from Loeb is:
​100.
Afra has mamas and dadas, but she herself may be called the
grandmama of dadas and mamas.

The English translation from Loeb is:
71. Flamingoes
My ruddy wing gives me a name, but my tongue is a treat to
​epicures. What if my tongue were to tell tales?