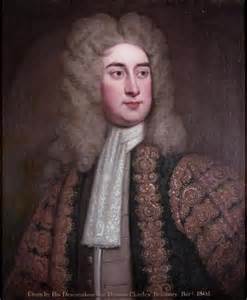 BKG Bio-tweet:  Prominent politician; Foundling Hospital founding Gov.; Editor of elegant, derivative edition of Shakespeare
Categories (list of works cited – preliminary) [BKG Note: about 52 Hanmer cites in 1755 Dict. Vol. 1, about 35 cites in Dict. vol. 2.  No additional Hanmer cites were identified in the 1773 edition.  Most Hanmer citations are definitions, from the Glossary of his Shakesperare edition, often followed by a Shakespeare quotation using the headword when the play is referenced for the Glossary entry.  Of the 29 Hanmer headword citations sampled, all are from the Hanmer's Shakespeare vol. 6 Glossary.  SJ apparently did not consult the Hanmer Glossary until after the Dict. letters "A" and "B" were completed.  Perhaps SJ marked definitions to be copied in the Glossary, and the transcribers followed the glossary cite to extract the Shakespeare quotation.]