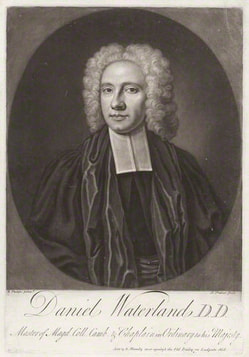 Categories (list of works cited – preliminary) [BKG Note: no Waterland cites were identified in the 1755 Dict.  Reddick, in The Making of Johnson's Dictionary, indicates that 63 Waterland cites were added in vol. 2 of the 1773 Dict.  Reddick also indicates that the vol. 2 cites are exclusively from the title below.  This title was confirmed for the two Waterland citations identified as added for new headwords in vol. 1 of the 1773 Dict.  Added 1773 Dict. Waterland cites are indicated in bold italic below.  In the Sale Catalogue of Samuel Johnson's Library, A Facsimile Edition, Fleeman, ed., Item 249 is 7. Waterland on the Trinity, &c., which may include the title below.]​