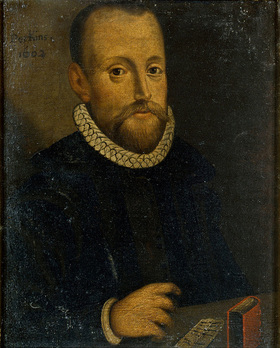 BKG Bio-tweet: Moderate-Puritan; Cambridge theologian; cleric; prolific author; Calvinist; SJ quotes on nature of sin in 4th ed.
​
Categories (list of works cited – preliminary) [BKG Note: no Perkins cites were identified in the 1755 Dict.  Six Perkins cites were identified as added in 1773 Dict. vol. 1 and 23 in 1773 Dict. vol. 2, indicated in bold italic below.  Reddick, in The Making of Johnson's Dictionary, p.122, indicates 25 Perkins additions in vol. 2 of the 1773 Dict., but does not identify a source text.  The source text now identified below was published after Perkins' death by Thomas Pickering (d.1625).  Pickering developed a manuscript from lectures given by Perkins, and states that Perkins reviewed the manuscripts before his death.  My thought is that the style is partly Pickerings, as the flow seems to me smoother than Perkins' other publications.  The text, including front matter, is about 200 pages, from which SJ selects quotations from the first 41 pages of text.  The title was not included in either the 1603 or the 1612 editions of Perkins Works.  A 1606 edition that substantially increases the volume of the work was published by Pickering from notes that he mentioned in the 1604 "first part."  After examining both texts, I conclude that SJ likely used the 1606 publication, or the 1651 reprint of: The whole treatise of the cases of conscience, distinguished into three books taught and delivered by M.W. Perkins in several lectures, examined by his own briefs and published for the common good, by T. Pickering, Bachelour of Divinitie, 1651,  London: Printed by J.L. and are to be sold by Thomas Pierrepont at the sign of the Sun in Paul's-Church-Yard.  See reprove below.The page numbers below are to the 1604 edition, which was examined first.] Perkins (no work cited);