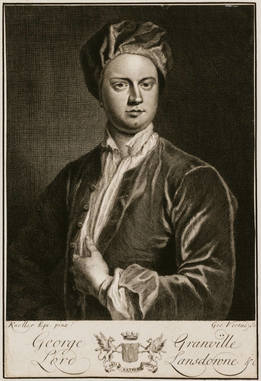 BKG Bio-tweet: Precocious poet; playwright; high offices under Q. Anne; SJ unimpressed by poetry (Lives) but quotes liberally in Dict.
Categories (list of works cited – preliminary) [BKG Note: about 96 Granville cites in 1755 Dict. vol.1, about 132 Granville cites in vol. 2.  Only about three of the cites are specifically to the Poems title (aconite; name, over-awe), but, based on the limited sample of headwords below, other cites appear to be from this source.  Granville's Apology is also cited (largeness), but in error: the citation is corrected to Glanville's [Glanvill's] Apology in the 1773 Dict.  Two Granville cites added in the 1773 Dict. were identified, indicated in bold italic headwords below.  Three Granville cites, under erect, grove, and unusual, were incorrectly changed to Glanville in the 1773 Dict.  The edition of Granville's Poems that SJ used is unknown.]
​
Poems upon Several Occasions, the Fourth Edition. 1726, London: Printed for J. Tonson, at Shakespear's Head, over against Katharine-Street in the Strand  OR  The genuine works: in verse and prose, of the Right Honourable George Granville, Lord Lansdowne. 1732, London: Printed for J. Tonson, and L. Gilliver [BKG Note: according to the Yale Vol. 22 editors (p.809), SJ used the first volume of the 1732 Works in writing the Granville chapter of the 1779-81 Lives.  Cloe perfuming herself, quoted under stink, does not appear in the 1726 Poems. it is possible that SJ marked the Poems, and recalled the 1732 poem inexactly.]