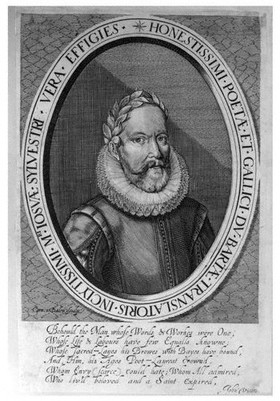 BKG Bio-tweet: Clothier’s son; poet; secretary to Merchant Adventurers in Low Countries; trans. of creation story possible Milton influence
Categories (list of works cited – preliminary) [BKG Note: One Sylvester citation was identified in the 1755 and 1773 Dict. editions.  No additional Sylvester citations were identified in the 1773 Dict. edition.  The Sylvester Du Bartas quote for “to periwig” appears to be from Dryden’s Dedication to the Spanish Fryar (the Sylvester translation of Du Bartas THE HANDI-CRAFTS. THE IIII. PART OF THE I. DAY OF THE II. WEEK reads "wooll" rather than "snow" as in Dryden's Dedication and the Dict.)]  Du Bartas his diuine weekes, and workes with a compleate collectio[n] of all the other most delight-full workes translated and written by yt famous philomusus, Iosuah Syluester Gent. 1621, ​London: Printed by Humphray Lownes.  [BKG Note: the edition of the Sylvester translation that Dryden may have used is unknown. The first edition of the quoted Sylvester translation of Du Bartas was [Th]e handy-crafts the fourth booke of the first day, of the second vveeke of the Diuine Salustiue Du Bartas, translated by Iosuah Syluester, 1599, London : Printed by P. Short for William Wood, and are to be sold at his shop at the west ende of Paules. ​