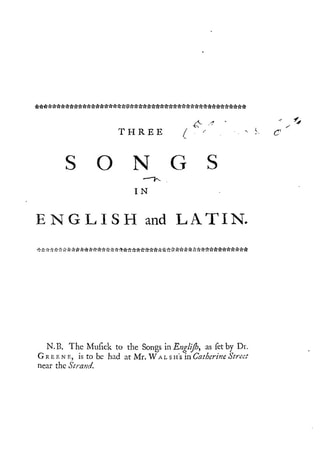 Categories (list of works cited – preliminary) [BKG Note: one Bourne cite in 1755 Dict. vol. 2.  No Bourne cites were identified as added in the 1773 Dict.  The verse is from the poem The Fly commonly attributed to William Oldys, which Bourne translated into Latin.  For an argument that the English was Bourne's, see William Oldys, Maurice Greene and ‘The Fly,’ H. Diack Johnstone, Notes and Queries, Volume 62, Issue 2, June 2015, Pages 297–301.  The Fly was first published as an anonymous ‘Anacreontick’ in The Scarborough Miscellany for the year 1732.  It was set to music by Maurice Greene (1696–1755) in volume IV of The Merry Musician; or, a cure for the spleen, in 1733.  Johnstone, in the article cited above, says that Greene attributed the words to "Mr. Bourn" in multiple editions.  SJ may have made the connection through Greene's attribution, or from the Three Songs in English and Latin (see images at left and below), published anonymously in 1746, but the Latin known to be by Bourne.  Johnstone says that Bourne's Latin version, Musca, appeared in an Appendix to the third edition of Bourne's Poematia, Latinè partim reddita, partim scripta, 1743.  SJ also translated the English Fly into Latin at an unknown date, first published by Hawkins and Langston in vol. 11 of the 1787 Works of Samuel Johnson.  The image of Johnson's Latin Fly from the 1787 Works is also below.  From the footnote on the image, it appears that the English poem was contemporaneously known as a song, rather than as the Anacreontick.  Further discussion of Johnson's Latin poem can be found in Yale Vol. 6, p.282, and in The Latin & Greek Poems of Samuel Johnson, 1995, Barry Baldwin, pp.109-112.  Thanks to Prof. Baldwin for guiding me to these Johnson poem sources.]

Three songs in English and Latin, 1746, London: published by B. Barker ​ 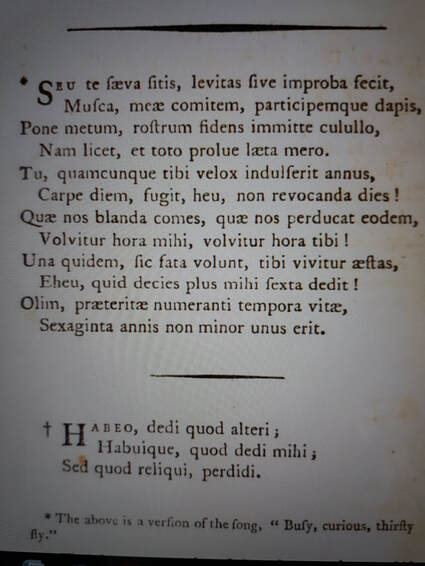