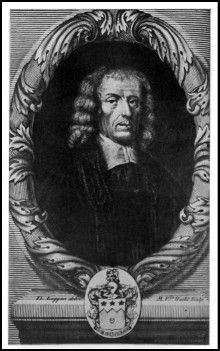 BKG Bio-tweet: Cambridge Fellow; rationalist theologian; prolific poetry, prose; SJ quotes prose
​
Categories (list of works cited – preliminary) [BKG Note: about 82 More cites in 1755 Dict. vol. 1, about 200 More cites in Dict. vol. 2.  The first H. More cite in the 1755 Dict. is under the letter D, which may explain the larger number of More cites in Dict. vol. 2.  Two More cites were identified as added in the 1773 Dict and are indicated in bold italic in the headword list below.  The headword quotes sampled for More cites given only as "More" without a work indicated, were all determined to be from one of the two titles below.  These are given in squared brackets "[ ]" under the source title.  About 10% of the headwords use the same quote as another headword.]