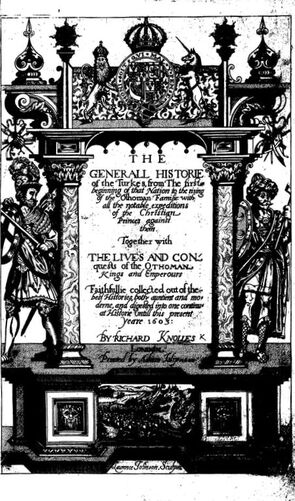 BKG Bio-tweet: Historian; trans.; first description of Ottoman Empire in English; SJ: all the excellencies that narration can admit
​
Categories (list of works cited – preliminary) [BKG Note: about 239 Knolles cites in 1755 Dict. vol. 1, about 268 Knolles cites in 1773 Dict. vol. 2. Five Knolles cites identified as added in the 1773 Dict. are indicated in bold italic below.  See Rambler #122 for Johnson's praise of Knolles style.  Also Yale Vol. 6 Poems, p. 106, Knolles mentioned as the source of the story of Johnson's play Irene in the first manuscript draft.  The story of Irene's death appears at p.353 (p.240 of the 1687 6th edition).  See Yale Vol. 6, Samuel Johnson Poems, 1964, pp. 109, 281 and The Poems of Samuel Johnson, second edition (revised by J.D. Fleeman), Oxford, 1974. With few exceptions (daly, p.347) all (approximately 100) Knolles cites sampled are from pp.567 to 694 of the 1603 edition pagination and pp. 384 to 467 of the 1687 edion pagination.  These pages are the first part of the history relating to the reign of the Ottoman Emperor Sulieman (Solyman) the Magnificent from the year 1520 to about 1540.  The * page numbers below are to the 1687 two-column edition text.  There are some variants in the cites, but not enough to determine which edition was used by SJ.  Based on the text change from beetil to beetle, I conclude that SJ's Dict. source was the 1610 2nd edition or later.  Based on the edition text changes from emperial to imperial and mases to maces, it is likely that the Dict. Knolles quotations are from an edition of 1631 or later.  There is one variant (vayuod to vayvod) that indicates that the 1687 edition may have been SJ's source.  If the 1687 edition was used for the Dict. quotes, it would indicate that SJ used a different volume for the Irene manuscript page number annotations, which correspond to earlier editions.  Use of a different edition for Irene is not unlikely, I think, as early work on Irene was begun in Edial, near Lichfield, and he would not have carried volumes on his ride-and-tie journey to London with Garrick.  SJ returned to Lichfield after a few months and finishes the play by October before travelling again to London, this time with his wife.  All pages for the sampled Knolles cites are within the date range covered by the 1603 edition, which extends to p.1152.] 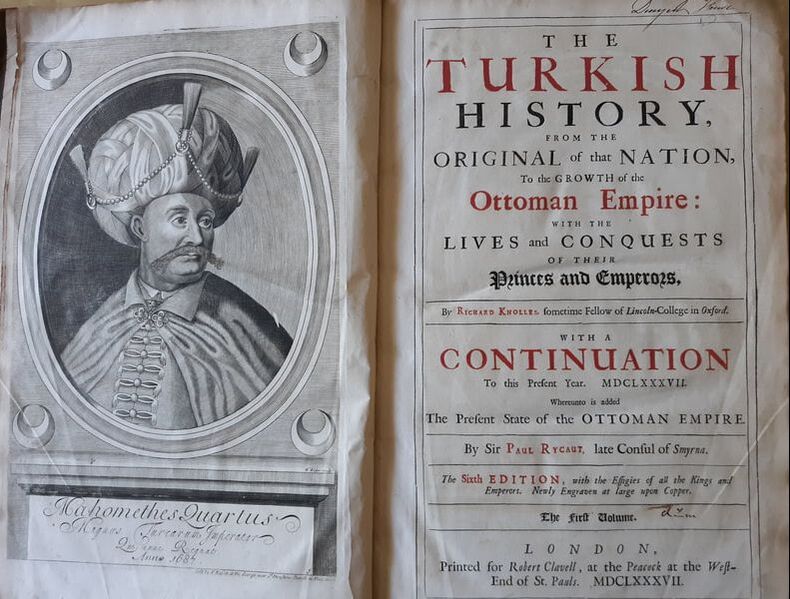