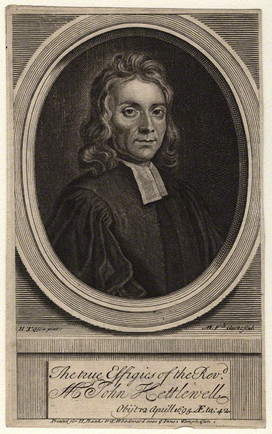 BKG Bio-tweet: Cleric; controversial devotional writer; preached against the Glorious Revolution; deprived of church offices
​
Categories (list of works cited – preliminary) [BKG Note: no Kettlewell cites in 1755 Dict.  74 quotes were identified (including the variant cites of Kettlew. and Kettleworth) as added in the 1773 Dict. and are indicated in boldface italic below.  Five of these are in 1773 Dict. vol. 1 and the remainder in vol. 2.  This agrees with Reddicks count of 69 Kettlewell cites in 1773 Dict. vol. 2 as reported in The Making of Johnson's Dictionary.  Of the quotations sampled, all appear to be from Part III. "Of Hindrances that keep Men from the Communion," Chapter IV: "Of Law-Suits," Chapter V.: "Of three other Hindrances," and Chapter VI: "Of two more Hindrances," of the title below.  The edition of the title below used by SJ is unknown, but appears to be not the 1st edition. The Seventh edition was published in 1713.  The page grouping of the sampled "Kettleworth" cites may indicate a transcriber error.]