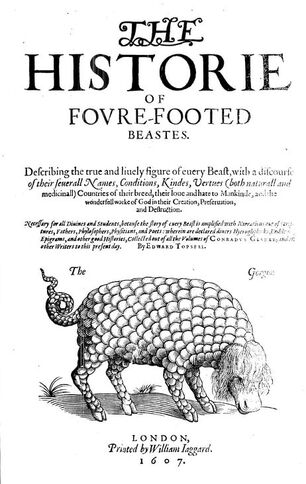 BKG Bio-tweet: Cleric; sermons on morality; as zoologist, compiled works of others; SJ cites in etym. for beshrew

Categories (list of works cited – preliminary) [BKG Note: one Topsell cite in 1755 Dict. vol. 1.]
​
Book of Animals: The historie of foure-footed beastes : Describing the true and liuely figure of euery beast, with a discourse of their seuerall names, conditions, kindes, vertues (both naturall and medicinall) countries of their breed, their loue and hate to mankinde, and the wonderfull worke of God in their creation, preseruation, and destruction. Necessary for all diuines and students, because the story of euery beast is amplified with narrations out of Scriptures, fathers, phylosophers, physitians, and poets: wherein are declared diuers hyerogliphicks, emblems, epigrams, and other good histories, collected out of all the volumes of Conradus Gesner, and all other writers to this present day. By Edward Topsell, 1607, London : Printed by William Iaggard; beshrew.

Dict.: "The original of this word is somewhat obscure; as it evidently implies to wish ill, some derive it from beschryen, Germ. to enchant. Topsel, in his Book of Animals, deduces it from the shrew mouse, an animal, says he, so poisonous, that its bite is a severe curse. A shrew likewise signifies a scolding woman; but its origin is not known."
Text (p.535):  "And concerning the description of this beast, it may be taken from the words of an auncient English Phisition, called Doctor William Turner.  I haue seene (saith he) in England, the Shrew-Mouse of colour blacke, hauing a taile very short, and her snout very long and sharp, and from the venomous biting of this beast, we haue an english prouerb or imprecation, I be shrow thee, when we curse or wish harm vnto any man, that is, that some such euil as the biting of this Mouse may come vpon him."
BKG William Turner (1509/10-1568) Biotweet: Cambridge degrees; Italy MD; Europe sojourn avoided Protestant martyrdom; botanist; published on herbs, birds, fishes, wines
[BKG Note: the Turner quote by Topsell was not found in Turner's 1568 Herball.]