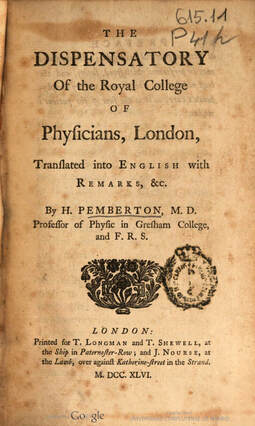 Categories (list of works cited – preliminary) [BKG Note: One cite from the London Dispensatory was identified.  Pemberton's translation was the fifth London Pharmacopoeia.   There appears to have been a rival publication in response to the title below, namely: "The New Dispensatory of the Royal College of Physicians in London, With copious and accurate indexes. Faithfully translated from the Latin of the Pharmacopoia Londinensis, publish'd by order of the King and Council" (also dated 1746) , which lists the members of the Royal College of Physicians at a much earlier date.  No similar quotation for prejudice was identified in the "New Dispensatory."]