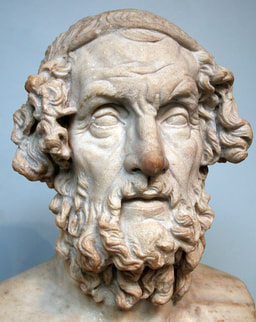 Homer (no work cited); caitiff  [BKG Note: see image below for SJ's Greek quotation from The Odyssey and translation (which is given in the etymology discussion before the Greek).  The following was kindly provided by Prof. Stephen E. Hinds of the University of Washington, Seattle, Classics Department.
The passage is from Odyssey, Book 17, a scene in which the swineherd Eumaeus is telling the disguised Odysseus (whom he does not yet recognize) that everything in Ithaca has been neglected by the servants in the long absence of the master — including Odysseus’ faithful dog.  Johnson more or less quotes verse 322, except that he replaces the last two words (= far-sounding Zeus) with two words from the second half of verse 323 (= 'the day of slavery’), and produces, in effect, a shorter one-verse version of the thought in the two Homeric verses.  So, as written by Johnson, the words translate as ‘the day of slavery takes away (or ‘destroys’) half one's worth (or ‘virtue’)’.  The Johnson paragraph that immediately precedes the Greek quotation is an English paraphrase of its thought.​]