SAMUEL JOHNSON DICTIONARY SOURCES
​Back to A - Author Names 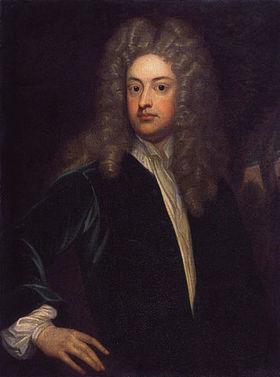 Authority Cited: Addison
Author name and dates: Joseph Addison (1672-1719)
​​​
BKG Bio-tweet: Classical scholar; prolific writer of popular and influential periodical essays; poet, playwright; public servant
​
Categories (list of works cited – preliminary) [BKG Note: about 2200 Addison cites in 1755 Dict. vol.1, about 2400 cites in 1755 Dict. vol.2; 23 added Addison cites were identified in vol. 1 of the 1773 Dict., and 25 in vol. 2, listed in bold italic below.  Brackets below indicate that the citation is only to "Addison." Reddick, in The Making of Johnson's Dictionary, p.122, reports 26 added cites of Addison in the 1773 Dict. in the Letters M to Z. The editions of Addison's works used by SJ is unknown.  The 1721 quarto 1st edition of Addison's Works does not contain the Drummer or the one-page Prologue to Phaedra and Hippolitus, both of which SJ quotes.  The 1726 London edition of the Miscellaneous Works does contain these pieces, as do the 1736, 1746 and 1753 London editions of the Miscellaneous Works.  However, the periodical pieces, such as the Spectator are not included in the Miscellaneous Works, so if SJ used the Miscellaneous Works, he also used separate editions of the periodicals. The advertisement in the 1726 London Miscellaneous Works states that the Spectators, Tatlers, Guardians, Freeholder, and Remarks on Italy had previously been published in twelves.  Issues of the Guardian, Spectator, and Tatler are quoted by SJ, but that are not in the 1721 Works are noted below.  The information below on Addison attributions in the periodicals Spectator, Guardian, Tatler, and Freeholder is from Rogal, S.J., "Joseph Addison (1679-1719): A Check-List of Works and Major Scholarship," Bulletin of the New York Public Library, Winter 1974, pp. 236-250.  Thanks to R. DeMaria for pointing out this reference.]
​Miscellaneous works, in verse and prose of the Late Right Honorable Joseph Addison, Esq. in Three Volumes, With some account of the life and writings of the author, by Mr. Tickell. 1726, London: Printed for Jacob Tonson.
​Freeholder; The Free-holder: or, Political essays by the Right Honourable Joseph Addison, the Eighth Edition, 1753, London: printed for Jacob and Richard Tonson; abet; abetter/abettor; able-bodied; accessible; [circulate (added in 1773 Dict.)]; [delicacy (added in 1773 Dict.)]; [BKG Note: about 380 total Freeholder cites. This title not in editions of Addison's Miscellaneous Works.  There were separate editions from 1715 onward, and all of the Freeholder cites indicated by issue number in vol. 1 of the 1755 Dict. are included in the 1721 Works.]