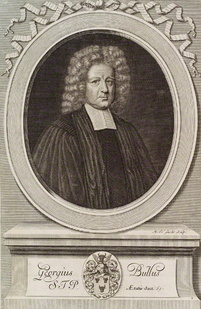 BKG Bio-tweet:  Controversial but respected cleric and theologian, defended Trinity, works in Latin, some in English
Categories (list of works cited – preliminary)
·       Sermons: Some important points of primitive Christianity maintained and defended; in several sermons and other discourses: by George Bull, D. D. Late Lord Bishop of St. David's. To which is prefixed, the history of his life, and of those Controversies in which he was Engaged. By Robert Nelson, Esq; ..., London : printed for Richard Smith at the Sign of Bishop Beveridge's Head in Pater-Noster-Row near Cheapside, and in Exeter-Change in the Strand, 1714; adversaria (from Vol. 2 (of 3), Sermon X, p. 407) [BKG Note: the image below of p.407 of this work, and the transcription of the Dict. entry, illustrate SJ's extraction from his source of both the example of the use of the word "adversaria" and its definition.  Because perhaps only one word in the Dict. was illustrated by a citation of Bull's Sermons, the entry may have been from SJ's memory.]
·       Bull (no work cited)
​

ADVERSA'RIA. n.s.[Lat. A book as it should seem, in which Debtor and Creditor were set in opposition.] A commonplace.  A book to note in.
These parchments are supposed to have been St. Paul's adversaria.               Bull's Sermons 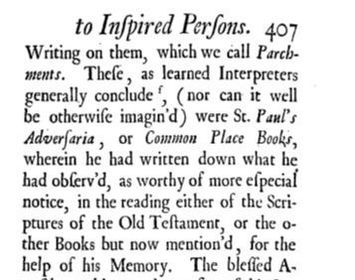