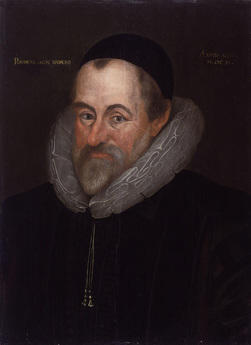 BKG Bio-tweet: Developed historical method; Archeol., history, topography by county; Latin “Britainnia”; collected added Remains in English
Categories (list of works cited – preliminary) [BKG Note: about 108 "Camden" or "Camden's Remains" cites in 1755 Dict. vol.1 about 120 cites in Dict. vol. 2.  All "Camden" quotations sampled are from "Camden's Remains."  The approximately 66 headwords sampled are principally from the letters A, B, F, H, L, O, and W.  Gibson's translation of Britannia is cited in the Dict. as "Gibson," or "Gibson's Camden."   Watkins in Johnson and English Poetry before 1660 (p. 90) consults the 1674 edition and concludes that the Andrew Bourd quotations come from the Remains, but could not determine the edition.  Yale Vol. 18, p. 281 n.7 says that SJ's copy of the 1636 edition with his notes and marginalia is in the Folger Library, and references item no. 37 in Fleeman's A Preliminary Handlist of Copies of Books associated with Samuel Johnson, 1984, which in turn indicates that the copy is Folger item 4525 Copy 2.  Fleeman also documents this as purchased by Webster at the Sale of Johnson's library, apparently one of three volumes in Item 605 3 Camden's Britannia, &c.  Based on the spurious headword foupe, the 1636 edition appears to be a candidate for SJ's markup for the 1755 Dict.  see also A Proverb]