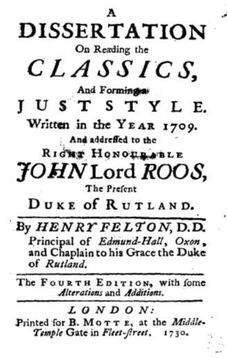 Categories (list of works cited – preliminary) [BKG Note: about 48 Felton cites in 1755 Dict. vol. 1 and about 54 cites in Dict. vol. 2.  One additional Felton cite was identified as added in the 1773 Dict. indicated in bold italic below.  An examination of the Felton quotations cited only as "Felton" indicates that all are from the title below.  The first edition of the title below was 1713.  A misattribution of the Felton quote under elucidator led me to notice that the quote did not appear in the title below until the 1715 Second Edition.  Because SJ had a general preference for the last edition of a work published during the author's lifetime, I think the 1730 Fourth Edition is a likely candidate.  There was a 1753 Fifth Edition, but the Felton quotes in the Dict. are distributed over the headword alphabet, and the first volume of the 1755 Dict. was, I think, in press by that time.  The online OED corrects the Abbot attribution to Felton and corrctly cites the first use as 1715.  An Open Accss electronic copy of the 1730 title below is at: https://babel.hathitrust.org/cgi/pt?id=umn.319510009533279&view=1up&seq=5  Thanks to B. Young for pointing out to me the Dict. misattribution of the elucidator quote.]