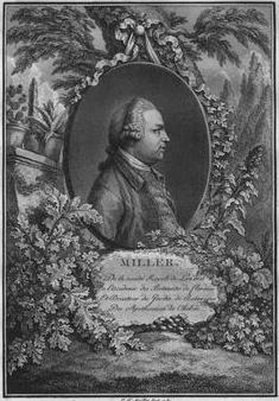 Categories (list of works cited – preliminary) [BKG Note: In the 1755 Dict., about 60 Miller citations in letters "A" through "B," one in "C," two in"D" and two in "L" are given as "Millar."  These are mostly corrected to "Miller" in the 1773 Dict.  About 250 Miller (including Millar), cites in 1755 Dict. vol.1, about 270 Miller cites in Dict. vol. 2.  One Miller cite was identified as added in the 1773 Dict., indicated in bold italic in the list below.  A number of the quotes from Miller's text are found under the Latin name, given after the entry of the English name in the Dict.; examples of a few of these are noted in the sample of about 250 Miller headword citations below.  A substantial number of Miller descriptive quotes, more than half, were eliminated from the 1773 Dict. or reduced to "A plant."  The commonly recognized plant names retain the Miller quote.  Where there was also a descriptive quote from Hill, the Hill quote is retained.  The portrait, published after his death, may or may not be Phillip Miller.]


[BKG Note: I arrived at the above title as the source of SJ's Miller quotations by the following trail:

From W.K. Wimsatt, Jr., Philosophic Words 1948 (p. 155): "PHILIP MILLER. The Gardeners Dictionary . . . wherein all the Articles contained in the former Editions of this Work, in Two Volumes, are disposed in One Alphabet. 6th ed. London, 1752.  I rely upon the description by Lane Cooper, "Dr. Johnson on Oats and Other Grains," PMLA, lii (September, 1937), 788-796. Professor Cooper's parallel of passages under nine cereals, including the notorious oats or avena, shows that this edition is representative of the earlier one which Johnson must have​ used. It was not the first, of 1724, nor the second, of 1733. I am unable to say which of the intervening editions first showed the extensive revisions which characterize Johnson's source."  The 5th edition, printed in Dublin, 1741, states that it is the first to combine the previous two volumes in one alphabet, and that it faithfully combines and corrects the 3rd edition, printed in London.  I checked only Avena (Oats) and it contains the words quoted in the Dictionary, so I think that the earliest edition that SJ could have used is the 3rd, two-alphabet edition, but that it is most likely he would have used a single alphabet edition.  On examining several editions, I found that the 6th edition, used by Cooper in the PMLA article is very likely not the edition used by SJ, as the Avena (oats) entry has an entirely different lead-in from that used in the Dictionary.  The Dictionary lead-in does appear in the 5th (Dublin) edition and in the abridged 1740 and 1748 (London) editions.  The three volume 1748 London abridged edition is, I think, the first London single-alphabet edition, and therefore the most likely candidate.  I checked all of the Cooper-cited grain entries in the 5th Dublin edition, but only Avena (oats) and Fagopyrum (buckwheat) in the 1748 abridged edition.  The Fagopyrum entry is telling as the word "seldom" used by Johnson (and appearing the the 5th Dublin and 1748 abridged edition) reads "never" in the 6th edition.]  [BKG Note addendum: In October, 2016, I was able to examine a hard copy of the 3-volume 1748 abridged edition.  I conclude that this edition, or a later abridged edition, is clearly the one used for the Dictionary definitions: the Dictionary entry for Wheat uses the word "preserved;" "preferr'd" is the word found under Triticum (wheat) in all of the Miller editions examined, except the 1748 abridged edition.  Cooper, in PMLA, assumed that there was a transcription error in the Dictionary entry, which appears not to be the case.]
[BKG Note: Under Avena (oats): "Oats are a very profitable grain, . . . being the principal grain which horses love . . . ."; "The meal of this grain makes tolerable good bread, and is the common food of the country people in the North."  So Johnson's famous definition of "Oats" appears to be founded on Miller.]