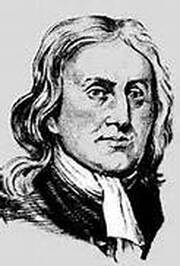 Categories (list of works cited – preliminary) [BKG Note: two Law cites in 1755 Dict. vol. 1, one Law cite in 1755 Dict. vol. 2. Reddick, in The Making of Johnson's Dictionary, indicates 179 total Law cites added in vol. 2 of the 1773 Dict.  19 additional Law cites were identified in vol. 1 of the 1773 Dict., all under the letters "F" and "G."  The sampled added Law cites in the 1773 Dict. are indicated in bold italic below.  Based on the sampled headwords below, I am inclined to think that SJ remembered (or misremembered) the Serious Call when entering the cite for gewgaw in the 1755 Dict., but marked the 2nd Serious Call edition for the 1773 Dict. additions.  See my comment under the gewgaw headword below.  Another indication of SJ consulting his memory for the 1755 Dict. is the misspelling of "Feliciana" as "Feliciano," in the gewgaw quote.  My thought is that this was a typesetter misreading SJ's handwriting rather than a transcriber error from a text.  For the 1755 Dict., the William Law cites may have been "honorable mentions" as Law was still alive and SJ downplayed the use of living writers in the Dict. Preface.  No cites of the Practical Treatise were identified as added in the 1773 Dict.]
​