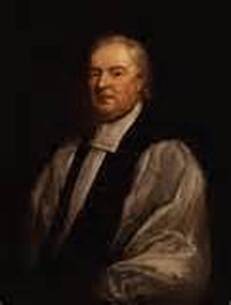 BKG Bio-tweet: Cleric; studied church fathers; practical sermons on personal morality; widow received large sum for manuscript sermons
​
Categories (list of works cited – preliminary) [BKG Note: about 357 Tillotson cites in 1755 Dict. vol. 1, about 317 Tillotson cites in 1755 Dict. vol. 2.  One Tillotson cite was identified as added in the 1773 Dict. indicated in bold italic below.  Specific sermons are cited by number in 1755 Dict. vol. 1 about 73 times under headwords of letters A through H, while in 1755 Dict. vol. 2 no  sermon numbers are given. The citation numbers change from Roman to Arabic in the letter C.  The 1707 edition of  Tillotson's Works uses capital Roman numerals for the Sermon numbers.  The edition(s) SJ used is unknown. The numbered Sermons cited are principally Sermons 1 through 6.  There were two versions of Tillotson's Works, 54 sermons published during his lifetime, and 200 sermons published from manuscripts after Tillotson's death.  SJ appears to have used the 54 sermon collection for his quotations.  See The Publishing of John Tillotson's Collected Works, 1695–1757, Rosemary Dixon, The Library, Volume 8, Issue 2, June 2007, Pages 154–181.  The first edition of the 58 Sermons was 1695 and the last separate edition was 1735.]

The works of the Most Reverend Dr. John Tillotson, late Lord Archbishop of Canterbury containing fifty four sermons and discourses, on several occasions : together with The rule of faith, being all that were published by His Grace himself, and now collected into one volume : to which is added, an alphabetical table of the principal matters, 1695, London: Printed for B. Aylmer at the Three Pigeons against the Royal Exchange in Cornhill And W. Rogers at the Sun against St. Dunstan's Church in Fleetstreet.​