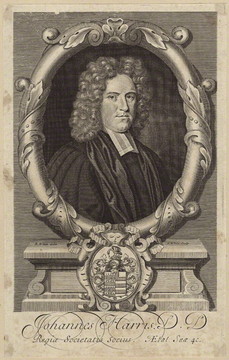 Creative commons license from National Portrait Gallery
BKG Bio-tweet: Cleric; microscope observations and mathematics; earliest English encyclopedia (Arts & Sciences); cited in SJ definitions
Categories (list of works cited – preliminary) [BKG Note: about 178 Harris cites in 1755 Dict. vol. 1, about 67 cites in vol. 2.  A later edition of the Lexicon Technicum, such as the 1736 5th edition, appears to have been used by SJ, as the quote for barometer was not found in the early Lexicon editions, but was found also in an abridged Philosophical Transactions, 1733, which references a 1728 Phil. Trans. article by J.G. Scheuchzer.  No editions of the Lexicon Technicum published between 1736 and the 1755 Dict. publication were identified.  Thanks to Alexander Bocast for verifying that there were no LT editions after the 5th edition, and confirming that the 5th edition was used by SJ by researching the quote for frieze, which is now added in the list below. There appear to be no quotes from Lexicon Technicum under the letter "A."  See also the Edmund Stone page.  No additional Harris cites were identified in the 1773 Dict.  The approximately 69 citations sampled and noted below were principally from the letters "B," "C," "P," "Q," and "V."]