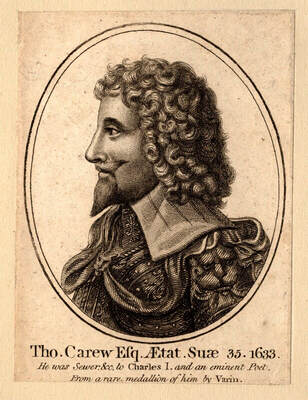 BKG Bio-tweet: Skilled but licentious poet, song-writer; European travels; Court offices under Charles I; “Cavalier Poet”; cited in 4th ed
​​
Categories (list of works cited – preliminary) [BKG Note: about 5 Thomas Carew cites added in 1773 Dict. vol. 1, about 23 cites added in 1773 Dict. vol. 2. These 1773 Dict. additions are indicated below in bold italic. Reddick, in The Making of Johnson's Dictionary, p.22, counted 22 Thomas Carew cites as added in vol. 2 of the 1773 Dict. The edition of the title below used by SJ is unknown.  The advisedly quote misattributed to John Suckling in the 1755 and 1773 Dict., may be a response to a Suckling letter by T. Carew. The T. Carew cites do not indicate the poem.]

Poems by Thomas Carew Esquire. One of the Gentlemen of the Privie-Chamber and Sewer in Ordinary to His Majesty. 1640 London : Printed by I.D. for Thomas Walkley, and are to be sold at the signe of the flying Horse, between Brittains Burse, and York-House