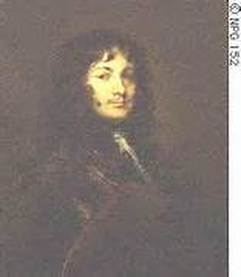 BKG Bio-tweet: European travels during Cromwell; diplomat for Charles II; policy friction: retired to estate; prose style highly regarded
Categories (list of works cited – preliminary) [BKG Note: about 290 Temple cites in 1755 Dict. Vol. 1, about 300 Temple cites in 1755 Dict. Vol. 2; about 12 and 40 respectively specified as from Miscellanies.  In some Dict. entries, SJ refers to Temple as an "innovator" in the formation of words.  Reddick in the Makinig of Johnson's Dictionary, p. 110, observes that SJ added 13 new Temple citations to the 1773 Dict. under the letter H.  He also concludes, incorrectly, that these are the only new Temple citations added.  My count of Temple additions to the 1773 Dict. is 31, distributed as follows: C=confine; D=devolve; E=evidence; F=favour, fineness; H=habit...hungry, 12 total; I=impotent...issue, 12 total; M=mart; P=passage.  Some of these additions are use of a previously cited quotation to illustrate a different word.]

Miscellanies Miscellanea in two parts. By Sir William Temple, Bar. the Fifth Edition. 1697, London : printed for Jacob Tonson, at the Judge's-Head in Fleetstreet, and Awnsham and John Churchill, at the Black-Swan in Pater-Noster-Row [Part 1]; and Richard and Ralph Simpson in St. Paul's Church-Yard [Part 2]
Miscellanea, the First Part, the Fifth Edition, 1697, Containing: Miscellanea, the Second Part, in Four Essays, the Fourth Edition, 1697: Miscellanea. The third part. Containing I. An essay on popular discontents; II. An essay upon health and long life. III. A defence of the essay upon antient and modern learning. With some other pieces. By the late Sir William Temple, Bar. Published by Jonathan Swift, A.M. Prebendary of St. Patrick's, Dublin. 1701, London : printed for Benjamin Tooke, at the Middle-Temple Gate in Fleet-Street ​Memoirs of what past in Christendom, from the war begun 1672 to the peace concluded 1679. 1692, London: Printed by R.R. for Ric. Chiswell ..., 1692. ; chuck [BKG Note: all of the above titles are in Vol. 1 of: The works of Sir William Temple, Bart. in two volumes. ... To which is prefix'd Some account of the life and writings of the author. 1731, London : printed for J. Round, J. Tonson, J. Clarke, B. Motte, T. Wotton, S. Birt, and T. Osborne.  The edition titles and editions SJ used for the Temple quotations has not been determined.]