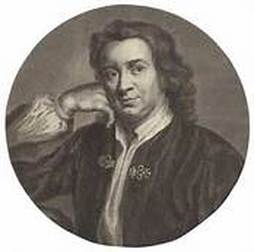 BKG Bio-tweet: Poet; Restoration playwright; wrote successful plays; died in poverty; SJ: moved the passions
Categories (list of works cited – preliminary) [BKG Note: about 28 Otway cites in Vol. 1 of the 1755 Dict., about 41 Otway cites in Vol. 2 of the 1755 Dict.  Most cites do not indicate the play quoted.  About 10% of the citations were noticed to use the same quote. The edition of the two plays from which SJ quotes is unknown.  A possible source is the 1728 Otway Works, which appears to be the latest edition of the Works prior to the 1755 publication date of the Dict.  The two plays from which quotations are taken for the Dict. are two of the four plays in Vol. 2 of this edition.  The Yale editors of Johnson's works, Vol. 21, state that SJ's Life of Otway quotes from a life of Otway in the 1712 edition of Otway's Works, but the same life appears in the 1728 edition.]
The works of Mr. Thomas Otway : in two volumes: consisting of his plays, poems, and love-letters. 1728, London: Printed for J. Tonson, G. Strahan, B. Motte, D. Browne ; Richard, James, and Bethel Wellington