SAMUEL JOHNSON DICTIONARY SOURCES
Back to B Author Names 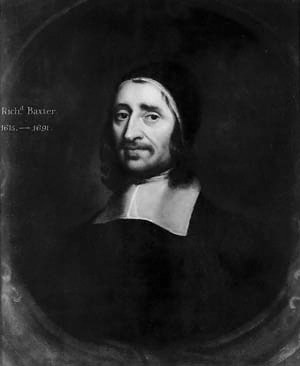 Categories (list of works cited – preliminary) [BKG Note: one R. Baxter cite identified as added in 1773 Dict.  The edition recalled by SJ is unknown.  There were editions published in both the 18th and the 18th century.  SJ, in a letter to bookseller Dilly of Jan. 6, 1784, asks him to send "the best printed edition of Baxter's Call to the Unconverted," likely as a gift along with certain books that "seem very proper to alure backward readers."  The Sale Catalogue of Samuel Johnson's Library, A Facsimile Edition, Fleeman, ed. lists the following Richard Baxter items: 113 . . .Methodius theologiae Christianae 1673; 360  5. Baxter's christian directory 1673 &c.; 510  Baxter on Apparitions, &c.; 527  6. Baxter on the divine life, &c.; 597  5. Baxter's Life, &c.]

A call to the unconverted to turn and live and accept of mercy while mercy may be had as ever they would find mercy in the day of their extremity from the living God / by his unworthy servant, Richard Baxter ; to be read in families where any are unconverted, 1658, London, Printed by R.W. for Nevil Simmons Book-seller in Kidderminster and by Nathaniel Ekins at the Gun in Paul's Church-Yard; unconverted (SJ refers to Baxter's title to illustrate an added sense of the headword in the 1773 Dict.)​