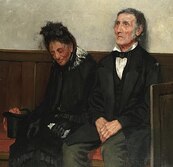 Categories (list of works cited – preliminary) [BKG Note: Thanks to Beth Rapp Young for identifying the likely source of the Dict. quote for truth as the Poetical Essays, March 1735, p.153, in the Gentleman's Magazine.  See the images of the poem below.  The poem is perhaps by Henry Woodfall (c.1686–1747).  The DNB says, under an entry for his grandson, that he was apprenticed to a printer John Darby (a John Darby, d.1704, was a printer with his wife of radical pieces, per the Darby online DNB entry).  Darby had a son John Darby, also a printer, and Woodfall may have been apprenticed to the son (d.1730).  (The archived DNB edition for H.S. Woodfall associates a printer Darby and his wife with the Song.)  The poem has had a long literary career, known as "Darby and Joan."  In July, 1735, SJ was married to the widow Porter - I can imagine selections from the Gentleman's Magazine being read aloud during their courtship, perhaps this poem.  One cite of Song in 1755 Dict. vol. 2, no additional cites of this poem have been noticed in the 1773 Dict.] 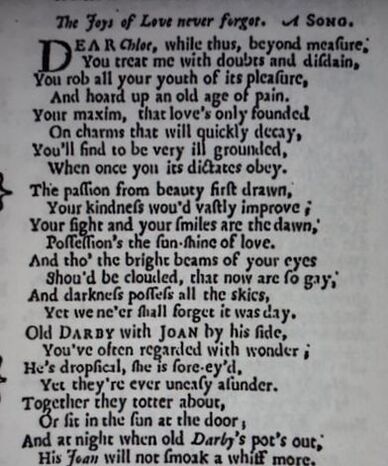 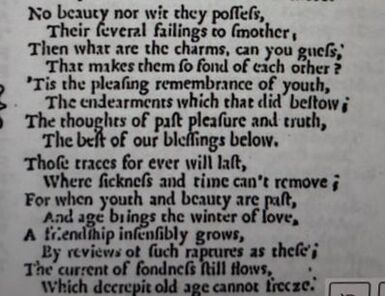