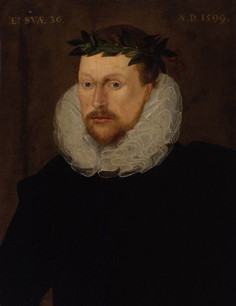 BKG Bio-tweet: Prolific and successful pastoral, historical, epic, and topographical poet; favored under Q. Elizabeth
​
Categories (list of works cited – preliminary): [BKG Note: about 24 Drayton cites in 1755 Dict. vol. 1, about 65 Drayton cites in 1755 Dict. vol. 2.  Six Drayton cites were identified as added in vol. 1 of the 1773 Dict.  Reddick, in The Making of Johnson's Dictionary, indicates that 92 Drayton cites were added in vol. 2 of the 1773 Dict.  A sample of the added Drayton headword cites is indicated in bold italic below.  In The Sale Catalogue of Samuel Johnson's Library, A Facsimile Edition, Fleeman, ed., item 356 is 2. Drayton's Works 1748. . . .]

​The works of Michael Drayton, Esq; A Celebrated Poet in the Reigns of Queen Elizabeth, King James I. and Charles I. Containing, I. The Battle of Agincourt. II. The Barons Wars. III. England's Heroical Epistles. IV. The Miseries of Queen Margaret, the Unfortunate Wife of the most Unfortunate King Henry VI. V. Nymphidia: or the Court of Fairy. VI. The Moon-Calf. Vii. The Legends of Robert Duke of Normandy, Matilda the Fair, Pierce Gaveston, and Tho. Cromwell E. of Essex. Viii. The Quest of Cynthia. IX. The Shepherd's Sirena. X. Poly-Olbion, with the Annotations of the learned Selden. XI. Elegies on several Occasions. XII. Ideas. Being all the writings of that celebrated author, now first collected into one volume, 1748, London : printed by J. Hughs, near Lincoln's-Inn-Fields, and sold by R. Dodsley, at Tully's-Head, Pall-Mall; J. Jolliffe in St. James's-Street; and W. Reeve in Fleet-Street.   Watkins in Johnson and English Poetry before 1660 (pp. 99-101) deduces that SJ used the 1748 edition for the 1st Dictionary edition quotations from Nymphidia and Quest of Cinthia. (The earlier Drayton edition of Poems that included these poems was 1631-1632.)  [BKG Note: another possible source for the first edition quotations, which appears to have the same text, is the 1753 edition.  The Drayton page citations below are to the 1748 edition.